The following is the text of a brief talk I was invited to deliver as part of the opening graduate student roundtable at the Indiana University Interdisciplinary Graduate Conference on March 26, 2015.  The conference theme was Breaking Futures: Imaginative (Re)visions of Time, while the roundtable theme was “Digital Humanities in Practice.”  I was joined by Lydia Wilkes, Mary Borgo, Whitney Sperrazza, and Erika Jenns, whose talks provided grounding for a rich dialogue for the many overlapping “digital” futures of the humanities, both in the classroom and in research.  It was a wonderful experience, if you want to see more from the conference, trawl the hasthtag #IUIC15 on twitter to see the archive of live-tweets. 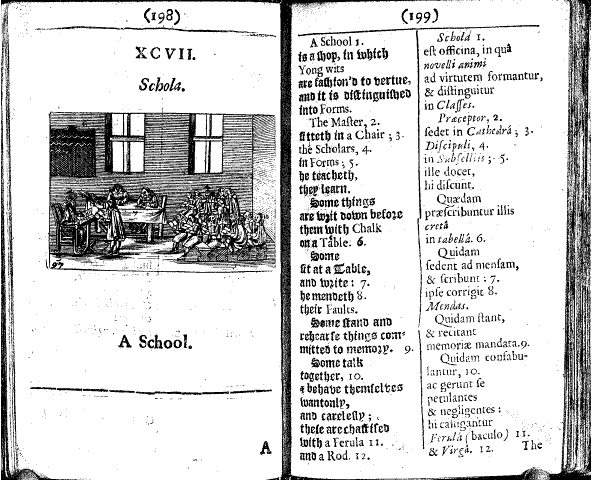 “Are you available for in-person office hours?” is a question I receive, in various forms, at least once a week.

For the past ten months or so I’ve been working with Lydia Wilkes and Justin Hodgson to build and implement an online version of English W-131, the intro to composition course most of the graduate students in here in the English department teach or will teach at some point.  This semester has seen the three of us piloting the course, personalizing it based on the framework we built collaboratively.  It’s my first time teaching online and, as such, has given me a reason to stop and reflect on what it means to practice digital humanities in the classroom; here, for me, the issue of the digital humanities necessarily emerges in the space of the online humanities classroom, since it raises questions about the technologies we use to facilitate education not only in face-to-face interactions, but how those technologies necessarily do or can reconfigure facilitation across greater spatial and temporal boundaries.

I’m not sure if before this semester I would have called myself a “digital humanist.”  Frankly, I’m still not sure that’s a label that I’d embrace.  Part of this is because – to put in it in the pithy and cynical way I developed when I was an undergrad – what will happen with the digital humanities is exactly what happened to the cellular phone: just as the latter became simply a phone, so too, I think, technological and computational creep will eventually become par for the course for doing any sort of work in the humanities.

Despite my suspicion that something about this still holds true, I now recognize that my too-cool-for-this-English-major-senior-capstone bon mot enacts a form of what Mark Sample last year called “facile thinking” about the digital humanities.  Though he uses this phrase to refer to the strawmen arguments of many DH alarmists and skeptics, I think it could also characterize the tacit way in which I rendered myself and the field unto the DH geist.

“[F]acile thinking strives to eliminate complexity,” Sample writes in his blog post on the subject, “both the complexity of different points of view and the complexity of inconvenient facts.”  By contrast, he says, the digital humanities and writing on them needs to evince more “difficult thinking,” a mixture of “evidentiary-based reasoning” and acknowledgment of divergent perspectives that adds up to what he calls a “rational empathy.”  In other words, by consigning to an inevitable digital ascent and assimilation, I primed myself to overlook the oddities and complications encountered in this transition.  For my students especially, the emotional and material stakes of education are far weightier than smartphones. 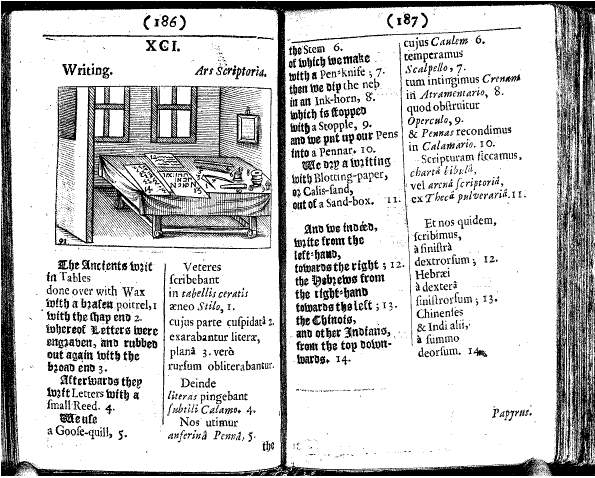 So, then, back to my opening, which by this point you may have forgotten: “Are you available for in-person office hours?”

I commute into Bloomington irregularly.  In this way, teaching online has been something of a relief for me, so my office hours are usually also online.  However, because occasionally I do have to be in Bloomington, and because the students in these pilot courses are all on campus, sometimes my office hours are in-person.  What I discovered, however, is that my students want to meet me in person far more frequently than, first of all, they actually can, and second of all, than I have ever experienced in my time teaching in a face-to-face classroom.

I assumed students who were okay with taking an online course that met once a week via videoconference would be okay with having office hours in a similar format.  One has to imagine, at least, that they feel comfortable enough with technology to take the plunge on the online course, anyway.  What I discovered, however, is that digital office hours are the most unpopular type of office hours I have ever had.  In fact, the only times students have met me in digital office hours are when I have explained to them that I wasn’t going to be on campus any time soon.

Indeed, another thing I have discovered is that the students in my online course are far more anxious about technology in general.  If an assignment or module posts with a typo or misdirected link, within an hour I’ll receive at least three emails – usually sounding mildly panicked – asking me for clarification and guidance.  When students take online quizzes and browser issues or an accidental page reload wipes or otherwise malforms their work, I receive lamentations explaining what happened, hoping I’ll be merciful.  The stakes in these instances are relatively small – a pietá over, at most, two or three points in a class scored out of 1000 – but the students’ frustration with the system is often palpable.  The obvious thing that has happened is that the technology has become more central in the students’ experience.  Rather than supplement my in-class lectures, the LMS is now the primary way of completing work.  When the tool fails, the student’s immediate fear is that, from my perspective as an instructor, this is also their failure.  These classroom technologies become more conspicuous as things that separate the students from the class and what I suspect they understand as the “real” me.

To provide evidence for this last assertion: the desire for in-person office hours is often framed by my students as a need to find out what “you” really want.  This is familiar rhetoric: I’ve heard it before in meatspace classes.  But I’ve heard it more frequently, and with a stronger valence of confusion, with this online course.  One student told me she wanted to know about what she called “your ideals,” and explicitly stated she felt like the online nature of the course had kept her from finding out what I wanted on our assignments.  Again, this is not a complaint unique to online coursework, but I think it’s important that in this scenario, technology can and does take the fall. 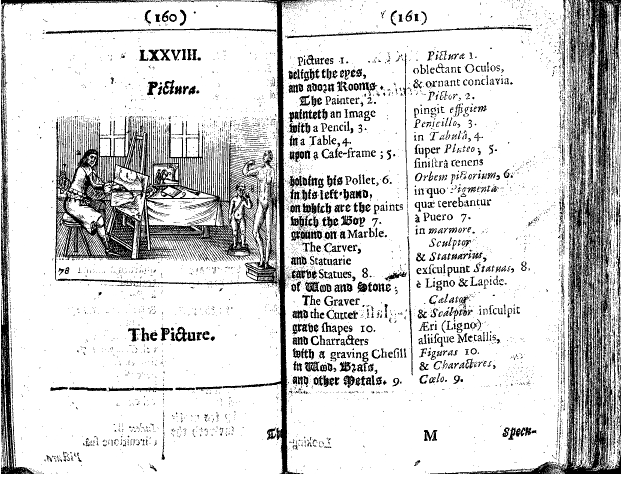 In the preface to his 1659 translation of the Czech pedagogue John Comenius’s Orbis sensualim pictus, one of the first illustrated textbooks, English humanist Charles Hoole explains how the innovation of adding pictures to the book, alongside parallel vernacular and Latin captions, will allow students to pick up Latin much more easily and quickly than ever before.  The reason for this, he argues, is that the sensual quality of the illustration and a preexisting knowledge of vernacular English allow the student to ground the Latin in a personal, experiential reality inaccessible when one is simply laying out grammatical rules.  This is incredibly important for Hoole, as he writes it is “the very Basis of our Profession, to search into the way of Childrens taking hold by little and little of what we teach them, that so we may apply our selves to their reach” (sig b1v).

What strikes me is Hoole’s commitment to the needs and limits of his students, based on a generalized sense of their day-to-day experiences.  The basis of our profession, he says, is to “apply ourselves to their reach” – to meet them halfway, and then move further along together.  I am reminded, actually, of Lisa Spiro’s argument that what defines the digital humanities is not necessarily the computational analysis of texts, but rather “collaboration, openness, and experimentation” as it is afforded by new technologies (“This Is Why We Fight”).  I am not arguing that the digital humanities will allow us to rediscover some forgotten or lost element of humanistic education.  But I would like to suggest that in his bid to defend the utility of the picture book, Hoole is engaging in precisely the “difficult thinking” Sample advocates, though his humanities are analog: he considers the perspectives and needs of his students and then does his best to search out technologies that will help him meet those needs, developing what Sample calls “rational empathy.”  Difficult thinking about DH, at least for me, has likewise foregrounded the importance of the interactions I have with my students as they are maintained and facilitated by our classroom technologies, and how this often seems to put my students at what they feel is a disadvantage.  For Hoole, studying what he calls the “representations” in the picture book is an intuitive activity, in that it is more or less the same as seeing or imagining the things themselves.  The technologies at work in my online teaching, however, seem to throw into question precisely the gaps between what my students see or read, what I write on our wiki pages, and what they hear me say in our videoconferences. 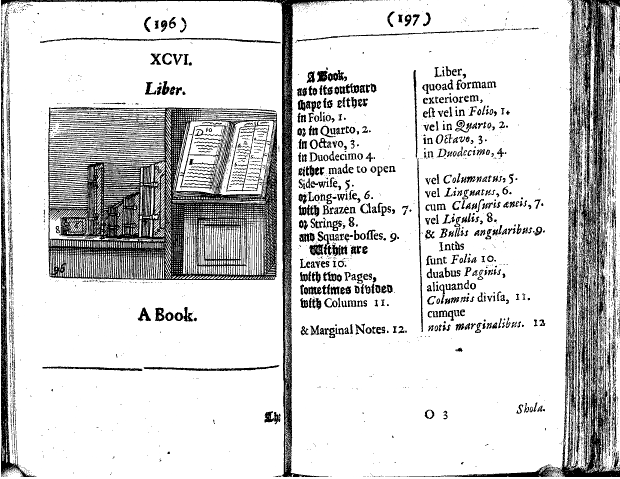 I plan on disseminating a survey to my students before the end of the semester, in which I’ll ask some particularly pointed questions about their experience in the class, and try to deduce a more evidentiary basis for what is right now a hunch.  What I suspect happened is something that supports the old platitude, you don’t really know what you have until it’s gone.  That is, certainly my students had expectations for what an online course would be and how it would function.  Maybe some of them even relished the idea of never having to see me face to face.  Maybe some of them thought it would be easier than a normal course, precisely because it was technologically mediated – we must keep in mind that our students may be as prone to facile thinking about the digital as we are.  But on the other hand, I recognize that I myself am an intuitive and a familiar piece of classroom technology that seems to have malfunctioned: from a student’s perspective, the online instructor is like a volume that is always checked out of the library, and can only be read in 15 page chunks on Google Books.  As I continue to the end of this semester, then, I know I must work in new ways to identify my students’ reach and apply myself to it, and to keep in mind the difficult thinking we all must do – students and instructors alike – in the weeks and years to come.